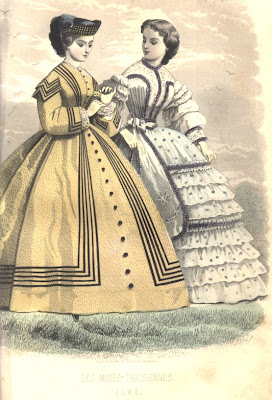 Fig 2 - House Dress of pearl-colored grenadine. The skirt is trimmed with flounces. Above the lower four is a quilling of mauve ribbon; then there are three more flounces with another quilling of ribbon above them. The body is low in the neck, with short sleeves, and over it is worn a white body, embroidered and trimmed with quillings of mauve ribbon. The sash is also trimmed to correspond with the body.

Fashion Plates, Fashion "Chit-chats", links to museum originals, resources, definitions, sewing and constructions tips - these are just some of the things you'll find here about Civil War Clothing for women, men and children! I hope you enjoy!